Last night's show at the 5 Towers on Universal CityWalk was simply epic. The stage was dazzling, the audience was beautiful and the band was jumping! I'm so grateful for every opportunity to entertain the masses and there were many hundreds of people at this show.

Did I mention the band. They were tight and the mood was joyful. It helped that the sound crew for the 5 Towers were handling biz expertly. We started the show with Fall Out. It was nice to be able to make an entrance at the top of the show. Adam Beesley, the MC, did a fab job of the introduction. But we came out amps ablazin'. From the top of the show, the energy was tremendous. Bryan's playing last night was on point and he kicked off our second number, Everyone's Ingenue. His guitar work was so much fun; and since I didn't play bass, I really got to watch and hear what he was doing. Omar D. Brancato, who handled the low end strings, was also a marvel. He was all over the stage with his wireless and brought a little extra flavor. Keyboardist Adam Marsland did a very cool vamp to bring us into Done Lost My Mind and the harmonies on that one soared.

We brought the rock and roll with the new arrangement of Supermodels With Gatling Guns from my upcoming CD (So Sophisticated). I like to think every song brought down the house. Supermodels is a gas to dance to, I know it had me moving. I could see all the dancers doing their runway stroll. Then we pounced on I Can't Cry From You featuring some stellar drumming from Matt Soule and hit a bunch of songs from my current release (A Talent For Loving).

Roses flew up to the stage; very fragrant and sweet. Perfectly timed for Everything My Heart Desires. We ended the show with a disco-trifecta. U Had The Money, the Bee Gees' Jive Talkin' and by demand, and I mean demand, A Talent For Loving.

I have posted a couple dozen photos on my facebook music page so far. More to come, along with video from the show. So be sure to stay tuned. The video will hit YouTube first. I'll be sure to announce when it is available. In the meantime, check out the photos, including the sample below of me doing my "Adjust the Cuffs" dance. 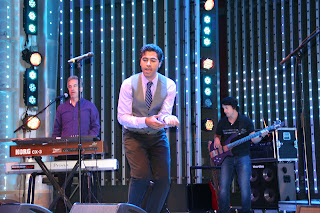 Popular posts from this blog

Murderous Haircut of the Mayor of Bel Air - Book Review

September 01, 2021
“The Murderous Haircut of the Mayor of Bel Air” is a trippy new mystery novel from Phillip Mottaz. It captures the grit and gilt of the City of Angels with the flair of a contemporary Raymond Chandler. The brisk pace and wit are reminiscent of Douglas Adams’s entries in the detective game. Flourishes of  Fletch  and “Medium” also spring to mind. However, Mottaz has added a psychic/mutant/superhuman touch and his own comedic voice, structure and internal monologues to the proceedings that help the author announce his own style and the arrival of a literary heroine for a new generation. Hairstylist and budding private investigator, Danica Luman is the perfect character to convey the irony, angst and sarcasm needed to tell a 21st century L.A. crime story. Danica also represents anyone who thought it would be neat to get tangled up in a mystery and the darkly comic cautionary tale that follows. The genre is recognizable, but Mottaz offers a fresh take on the not-ready-for-prime-time-hard-b
Post a Comment
Read more

Well, I Left My Jag In Kansas City

December 12, 2005
Hey Soul Mates, that's one of my all-time favorite movie lines. On occasion in real life, I've been able to say it. That bit of dialogue is from Silver Streak . My buddy Mike told me to say something about Richard Pryor . That man was funny. How about that? I always looked forward to going to his movies as a kid: Bustin' Loose, Wholly Moses!, Brewster's Millions, The Toy and See No Evil, Hear No Evil . Plus, if you got to see his latest movie, you were "cool." We'd watch the rest on TV: Car Wash, Bingo Long, Greased Lightning and The Wiz to name a few [I know one of Bryan's all-time faves is Moving ]. Just last month, I caught his big scene in Uptown Saturday Night on BET. These are not necessarily classics, but Mr. Pryor's performances were all enjoyable and there was a feeling of rebellion in watching him work. As a kid, it was like you were given a peek into the absurd, adult world through his humor. He was showing us how messed up Ameri
Post a Comment
Read more

June 29, 2021
Lord Huron - Long Lost  Republic, 2021 Released on Whispering Pines Records & Tapes, Lord Huron’s new LP Long Lost is a Fabulist & Western concept album. The band has traditionally tapped into the spirit of Hank Williams, Springsteen and Roy Orbison with lovelorn, operatic flair. Ghosts are never too far, either, and Lord Huron have never been ‘fraid of them or reverb. They have added to their usual cinematic repertoire by way of interludes jarring and organic, spoken word introductions (maybe label founder Tubbs Tarbell?) and reprises, enhanced by headphone listening. The result is an experience that sounds like a vintage radio show produced by David Lynch with lead singer Ben Schneider in the role of Special Agent Chester Desmond’s musical nephew’s doppelgänger. Standout songs are the stunning title track Long Lost, I Lied, and Not Dead Yet. The last quarter of the album is a dream state soundscape, Time’s Blur, the band becoming the radio wave escaping earth’s atmosphere. T
Post a Comment
Read more

Norman K
Thankful 'n Thoughtful. Norman's albums ON THE REBOUND and A TALENT FOR LOVING are available online at iTunes, Amazon.com, CDBaby, and elsewhere on the web.